The wonderful folks at eMergent Publishing have sent us a range of new stock this week. These books are independently published here in Australia and look absolutely amazing.

I would like to thank Jodi Cleghorn and her staff for making this endeavour possible. I am a firm believer that independent authors and publishers should be given as much exposure as possible. I am looking forward to strengthening our ties with eMergent Publishing in the near future. 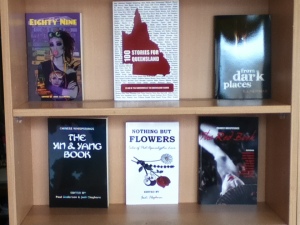 100 Stories for Quuensland has something for everyone, from slice of life to science fiction, fantasy to romance, crime to comedy, paranormal to literary fiction. Heart-warming, quirky, inspiring and funny, the stories between these covers will lift readers to higher ground.

All proceeds to the Queensland Premier’s Flood Appeal.

“One hundred beautiful stories. Our stories. When so much was lost or destroyed, this was created. That’s something that can never recede or wash away.”

Miranda reaps what she has sown. Mitchell understands there is no resisting fate. Clint dreams of forging a violent destiny. Elizabeth is about to make a discovery. Robin hides a terrible secret. Simon hasn’t slept in ten days. Sam is pursued by nightmares. Susie has lost everything. David has just been found. Jake atones for past evils.

Ten ordinary people struggling to keep their sanity in an insane world.

The year the Berlin Wall came down and Voyager went up. Ted Bundy and Emperor Hirohito died. The birth of the first Bush administration and computer virus.

In San Francisco and Newcastle the ground shook, in Chernobyl it melted. Tiananmen Square rocked the world and Tank Man imprinted on the international consciousness. Communism and Thatcherism began their decline, Islamic fundamentalism its rise.

It was the year Batman burst onto the big screen, we went back to the future (again) Indiana Jones made it a trifecta at the box office and Michael Damian told us to rock on.

Based on a play list of 26 songs released in 1989 , Eighty Nine re-imagines the social, political, cultural and personal experiences at the end of the decade which gave the world mullets, crimped hair, neon-coloured clothing, acid-wash denim, keytars, the walkman, Live Aid, the first compact disc and MTV.

In a devastated world, a voice calls out through the darkness of space, a young woman embraces Darwin, a man lays flowers in a shattered doorway, a two-dimensional wedding feast awaits guests, a Dodge Challenger roars down the deserted highway

…and that’s just the beginning.

Inspired by the Talking Heads’ song of the same name, Nothing but Flowers explores the complexities and challenges of love in a post-apocalyptic landscape; from a take-away coffee mug to a gun to the head, a fortune cookie to a guitar, the open road and beyond. Poignant, funny, horrifying and sensual, this collection of short fiction leaves an indelible mark on ideas of what it means to love and be loved.

All profits from the sale of this anthology go to The Grantham Flood Support Fund.

7.30AM. THE INTERNATIONAL TERMINAL OF A MAJOR EUROPEAN AIRPORT IS POISED ON THE BRINK OF CHAOS.

7.35AM. PANGAEAN AIRLINES, EUROPE’S PREMIER CARRIER, IS PLACED INTO RECEIVERSHIP, CANCELLING ALL FLIGHTS AND IMPOUNDING THOUSANDS OF ITEMS OF LUGGAGE.

The Yin and Yang Book follows the complicated web of events stemming from a suitcase, a stolen van Gogh painting, one woman on the run from her employers and the consequences of her decision to stay or go.

Abby finds a creative solution to her father’s problems. Ben makes a pact with the Devil for a new Mum. Katie is pursued by unrelenting voices. John just found his colleague’s hand in a strange girl’s lap. Jarvis is falling apart on his wedding day. Rosalind comes face-to-face with her number one fan. And that is just the beginning.

E.J. Newman’s debut anthology is a dark and twisting journey across the urban landscape, mining the rich seam of human frailties with insight and humour. The stories traverse the magical and the mundane, where supernatural beings are indistinguishable from their mortal counterparts in their complexity and complicity.
(Temporarily Out of Stock)

Talk about it Cancel reply

More local history books in this afternoon.
LOCAL HISTORY IN THE HOUSE!

Join us on Goodreads

NOS4A2
by Joe Hill
Joe Hill's latest book, NOS4A2, is story-telling in its finest form. The premise of the story is easily found - I won't try and sum up 700+ pages in this review - but to say it was creative, intelligent and action-packed would be an un...

The Color of Magic
by Terry Pratchett
I’ve wanted to read Terry Pratchett since I saw a trailer for Hogfather. I was intrigued, but I had to read the book first, and then I had to start at the first book in the Discworld series. But first I had to find it. So reading The Col...

Into Thin Air
by Nigel Bird
George has been in Denmark for quite some time and has failed to make a mark that he had hoped to. One afternoon, he stops for a drink and meets a beautiful woman with a thing for apples... Nigel Bird is one of my favourite indie aut...

At the Meade Bed & Breakfast
by Robert Swartwood
This story is a mystery - a pair of ghost-hunters investigating a small bed & breakfast that is supposedly haunted by the ghost of Charles Buford, the Civil War's most notorious mass murderer. However, it falls pretty flat and the sugar-...